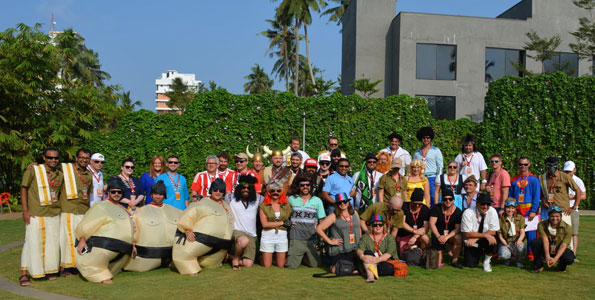 All contestants of the RICKSHAW CHALLENGE MALABAR 2016 (Photo: Janardan, Team The Autowale )

The last stage of the Rickshaw Challenge Malabar Rampage 2016 consisted of a nice trip to Goa, the award ceremony and the closing party. So, this day was for sure the nicest for the racers, and many of them were already in party mode while on the way to Goa, the smallest state of India. They were passing nice streets, woods and moving from beaches to beaches.

The last stage was a 250 kilometres driving from Murudeshwar to Panaji, the capital of Goa. Considering the fact that they were still driving tuk-tuks in India, the 250 sounds like a rough day for the rickshaw racers. 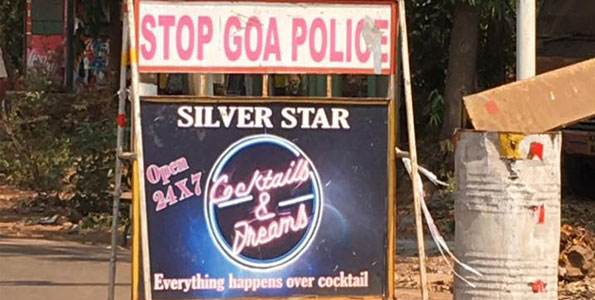 “Everything happens over cocktail” (Photo: Per, Team Rising Sun)

However, the trip to Goa meant easy and clear roads for the participants, so most of them reached Panaji early. The party already started for them early in the day as the hotel and its pool offered a beautiful view of the city and its rivers. Some of the racers were brave enough to try feni, the infamous spirit of Goa made either of cashew or toddy palm. For most of them it was a bad decision, but another interesting chapter in their adventure for sure…

The Trip to Goa started the party

Since the party already started after the trip to Goa was completed, the only challenge for the pack was to make it to the award ceremony in time. However it seems that many of the racers have fully embraced the relaxing life and unique time concept of India, so arriving in time was way harder for many of them than expected. But after all, everyone made it to the “Down the Road Bar” to collect their medals for surviving the 2016 Rickshaw Challenge and to find out the winners of certain categories.

Team Goan Places, made of Australian and American racers, received the Charity Award for raising $12,000 for the Round Table India. This is the most important aspect of the race actually, since the guys are helping many children with this. Team Goan Places also told that they want to reach $20,000.

The craziest team received the Bonkers Award, which turned out to be Team Butt, Sweat and Tears. The guys from Australia, France and Malaysia accomplished the Malabar Rampage in their inflatable sumo ringer costumes, so the award was well-deserved.

The winner of the 2016 Rickshaw Challenge is Team Champagne, who mysteriously disappeared from the rankings at one point of the challenge, but after the trip to Goa was completed, emerged as winners. Before the shower of champagne had started, flooding the whole room, an entirely touching acceptance speech wrapped up the event, and started the party, that continued until morning.

All the teams participating in the Rickshaw Challenge Malabar Rampage 2016 consisted great racers who were excellent team players at the same time. This unique rickshaw rally has produced some unforgettable memories – not only for the drivers but for the organizing Travel Scientists as well, who were thankful to everyone who took part in this adventure.