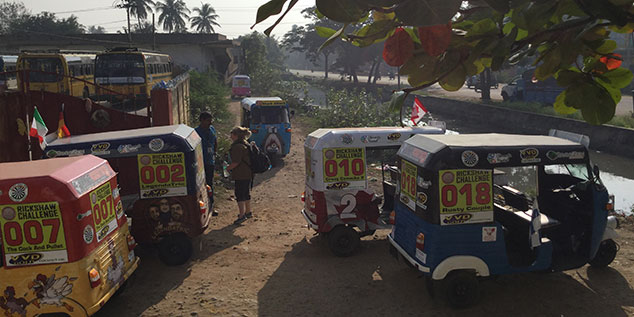 Day 4 of the Indian Classic Run brought the teams from Thanjavur to Madurai, with lots of exciting adventures along the way.

All 20 teams departed the incredible Thanjavur hotel and headed towards Madurai, the religious center of India, in the morning. Things went smoothly on the Indian highways for the majority of the day, but things got slightly more interesting once they teams got into the crowded city streets.

Team Cock and the Pullet broke the clean accident record by scraping their tuk tuk against… An Indian police bus! Luckily they got off without any major offenses, likely due to the shock the Indian police officers felt after seeing the team dressed in their full chicken outfits. It’s these types of incidents that make the Rickshaw Challenge such an exciting and popular event. 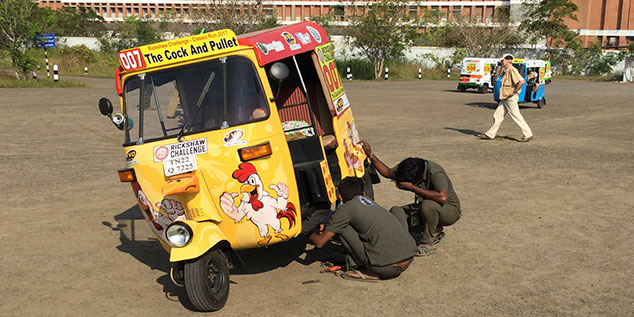 Looks like the team had troubles since day 1 (Photo: Jim Gill)

Despite a number of incredible sights and stops during day 4 of the Indian Classic Run, no teams were late to dinner.

New Years is a day for celebrations everywhere, and Madurai is no different. Despite the day falling on a Saturday, however, most parties were shut down shortly after midnight.

That couldn’t damper the team’s spirits, as they continued the Indian new year’s party at the hotel, hosted by the current front runners for the Whacky Awards, team Libba’s Mo. The hotel staff were polite and allowed the shenanigans to continue late into the night.