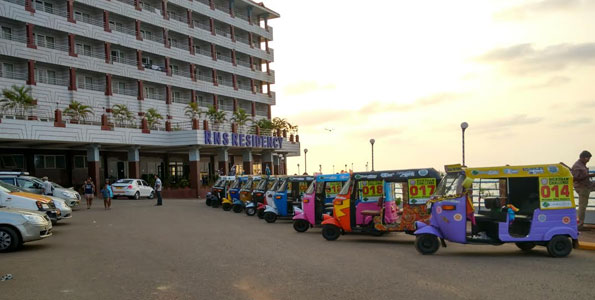 The penultimate stage of the 2016 Rickshaw Challenge was meant to be a relaxing one. Only 150 kilometres to cover from Mangalore to Murudeshwar – the home of the tallest Lord Shiva statue in India – on the best roads of the Malabar Rampage so far. However, Teams Badmaash 1 and 2 still managed to break down twice. But the supporting technicians of the Chennai Garage were always there to help them out, even without a call. They only needed a few minutes to fix the rickshaws and put them back on track.

The Udupi Sri Krishna temple provided the spectacle of the day. Udupi is a quiet little town that is only famous for the temple that goes back to the 13th century. Here the rickshaw racers had the opportunity to get in touch with the religious life of the Hindus. Women dressed in their finest saries coming to the temple were an attraction itself, as well as the holy cows roaming around freely.

The pack also visited a school in Malikatte, obviously in their hilarious costumes. The Rickshaw Challenge is a committed supporter of the Round Table, raising funds through the Freedom Through Education programme. So, this item couldn’t be left out from the schedule, but it wasn’t a displeasing obligation for the racers at all, quite the contrary. They did not only entertain the kids with their colourful costumes but also gave them a ride on their tuk-tuks and provided small gifts in the form of pencils and water colours.
When the pack finally arrived in Murudeshwar, they experienced the highlight of the day. On their way up to the hotel, the tallest Lord Shiva statue in India showed up on the hill in the late afternoon light. With most of the Rickshaw Challenge Malabar Rampage distance behind their backs, the racers also deserved the sight of the beautiful sunset they were able to observe from their hotel situated right at the beach.