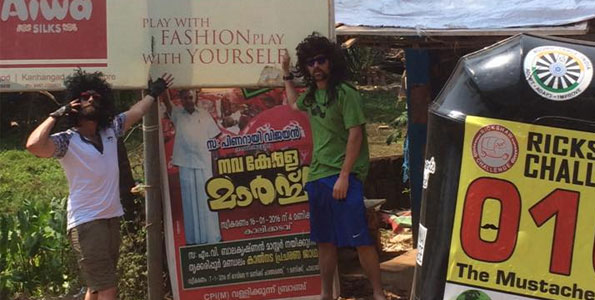 Nothing wrong in playing with fashion (Photo: Stephanie, team The Moustache Ride)

Day 5’s tuk-tuk travels were from Calicut to Mangalore, with challenges en route, historical stops galore, and the goal of reaching a state with more lenient alcohol restrictions!

The fifth day of the Malabar Ramapage included 260km of tuk-tuk travels, leaving Kerala and reaching Karnataka. It can be tough to find alcohol in India in places like Kerala, but in Managlore it’s not so tough to find a beer. In some states, getting a beer is in the real adventure in India!

Before they could even think about Indian alcohol laws, though, they had challenges to complete. Team Blues Brothers excelled when it came to Day 5’s tasks: one of them got their picture taken with a holy man and they also took some locals along for a ride in their rickshaw! 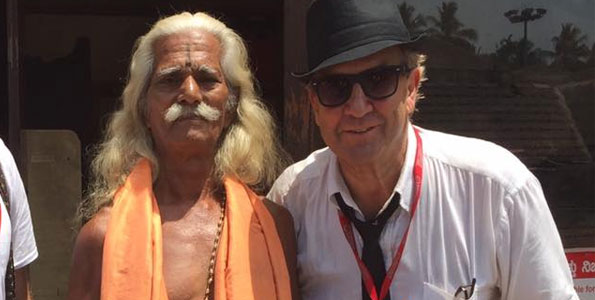 Competitors with an interest in history were spoiled by a visit to Kappad Beach, the 15th Century landing point for Vasco de Gama! It was also possible to visit wave-soaked Bekal Fort, the largest fort in Kerala. This beautiful spot is surrounded by 1000s of coconut trees, and is next to a beach 1km long.

Upon reaching Mangalore, competitors could finally let their hair down and relax. They ate, relaxed and socialized till very late, at the official (belated) Malabar Rampage starting party! Best of all, teams got to take a break from driving the rickshaws themselves, as they were driven to the party!

Despite Day 5 marking the official starting party, the trip was more than half done. All the teams had seen their fair share of adventures, and were starting to feel like they knew India a little better. The party was a great success, a real highlight of the tuk-tuk travels so far.