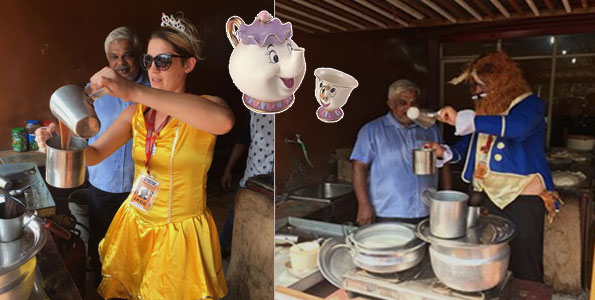 These guys should know something about tea by now… (Photo: Mel, team Malabar Mad Hatters )

Day 3 of the Travel Scientists’ incredible rickshaw race saw teams travel to the Venice of the east, watery wonderland Alleppey.

Things are hotting up in the sub-continents’ premier rickshaw race. Teams donned their costumes, with Butt, Sweat, and Tears living up to their team-name thanks to the humid conditions and their inflatable sumo suits! Racers began in Trivandrum, and were set to travel to the Venice of the East, Alleppey, but had to complete some entertaining challenges first.

The first challenge for the contestants was to make chai in a local tea store. Not as simple as you might guess, as they were still dressed in their costumes! It only got harder, as the second chance was to take a photo of a cow. If you’ve never tried that, cows don’t enjoy being photographed… they tend to worry about how they look so they try their best to run out of shot!

Travel to the Venice of the East turned rickshaw race into beach holiday!

It wasn’t all hard work on Day 3, as racers made a relaxing stop at Varkala Beach. This isolated spot was the perfect place to relax in the sun and forget about the rickshaw race altogether! With freshly made coconut shakes available, it’s surprising that all the teams ever left! 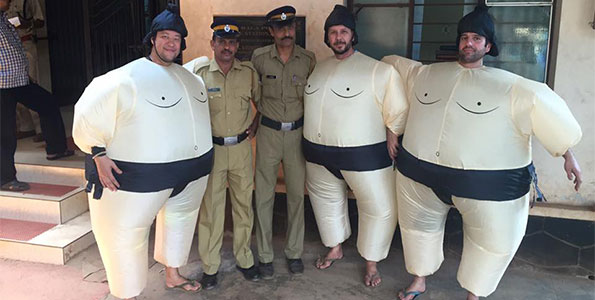