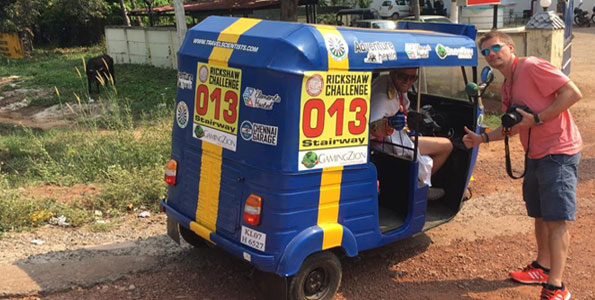 Will 13 prove a lucky number for Stairway?

The 21 teams who entered the 2016 edition of the Rickshaw Challenge Malabar Rampage started their preparation for the 1000 km race on Saturday. They gathered in Trivandrum, Kerala for the warmup and the start procedure of this adventure rally with a difference.

After having officially registered, the racing teams got some vital information and advice from the organizing Travel Scientists, including a tip about do not try to change Indian people as even the British failed while trying that. They were also advised to relax and this was obviously a sensible call before hitting this crazy Indian adventure rally along the Malabar Coast with a lot of surprises waiting for the teams.

The first driving experience in the 2016 Malabar Rampage

Free practice took place in the afternoon. The racers were able to approach the vehicles they would use during the crazy challenges of the Malabar Rampage. They got the opportunity to test the speed limits, racing characteristics and other features of the rickshaws at the preparation track.

Warm-up practice was next in the program, where all the drivers had to show their rickshaw-steering abilities. This was a vital part of the preparation procedure – you can’t just let them running riot in the crazy roads of India without having complete control over their machines. Most of the drivers were rather okay than excellent, but according to the organizers, neither of them would pose a real threat towards the chaotic Indian traffic.

The first accident of the 2016 Rickshaw Challenge

They also got their first live experience of driving in the Indian traffic and the session did not pass without an accident. The Blues Brothers team has successfully crashed their rickshaw. Luckily, they were able to emerge harmlessly from the crashed vehicle.

After meeting in the hotel, the drivers were sent into the nightlife of Trivandrum to fill their bellies with some alcohol fuel. This was a challenge in itself, as Kerala state legally bans the sale and consumption of alcohol in bars. So, the racers had to do their best to get information from the locals about where to find hidden drinking dents. This experience will be vital for their upcoming adventures…