The Hindustan Ambassador is back.

After being the King of the Indian streets from 1958 to mid 1980s, the Ambassador is making a comeback, headlining as the star vehicle in The Travel Scientists’ India’s Cup Southern Xpress 2015.

The Travel Scientists are renown for their original travel events around the world, like India’s Rickshaw Challenge and the adrenaline charged Central Asia Rally. Now, it is time for the Ambassador to lead the pack in an action packed adventure in the India’s Cup.

This journey will take 7 brave teams from Chennai to Mumbai, down to Tiruvanathapuram, and back up to Chennai, more than 3,000 kilometers across India packed in only 2 weeks.

This is no easy task for any car, but the Ambassador is not just any car, even winning World’s Best Taxi in 2012 against other iconic cars at a competition held by world famous TV show: Top Gear.

Hindustan Motors Limited suspended the production of the Ambassador in 2014, but it is still a popular car in India, it acts as a taxi in many Indian cities, just in Kolkata alone, 33,000 Ambassadors are used as taxis. It is also the choice of transportation for many bureaucrats and politicians that use this car as its official car.

Gamingzion Events will be following closely the whereabouts of these adventurers, and their adventures driving this vintage cars and congratulates Travel Scientists’ initiative of not letting a part of India’s culture drive off to the sunset. 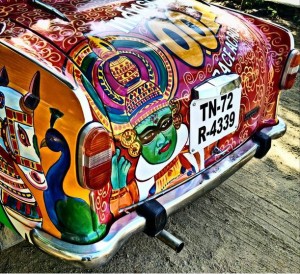